This year we ran our Diversity in Advertising competition again, in partnership with the Mayor of London 🏆🏅

In 2018, together with City Hall, we launched the inaugural Diversity in Advertising competition focusing on challenging attitudes around gender inequality and particularly the representation of women. In 2019 we asked entrants to submit campaigns which featured authentic representations of London’s Black, Asian or Minority Ethnic communities.

Following the success of these competitions, we asked for a campaign that challenges ageism in advertising, based within our diverse London community 🏙.  We were looking for ideas that genuinely market a product, or brand, while portraying our older community members beyond typical stereotypes.

The UK has an ageing population and Lloyds Banking research in 2016 found that while those over 65 years old made up 17.7 per cent of the population, they only featured in 6.17 per cent of advertising. This is echoed by the research carried out by UCL for the 2018 Diversity in Advertising competition, which showed that people over the age of 55 reported feeling ‘invisible’ and ‘irrelevant’, with fewer than one in four respondents being able to recall seeing an advert featuring someone with wrinkles.

The emphasis of the campaign is to be genuine and credible, while challenging stereotypes and is more about authenticity and depth than simplistic representation.

The winner receives up to £500,000-worth of advertising across the network and the runner up has the opportunity to run a campaign with match funding up to the value of £50,000. 🏆🚇

As with the previous years, the advertising space for both companies has been provided by TfL’s advertising partners, at no cost to TfL. Both campaigns have been reviewed through the TfL copy process to ensure they are compliant with the advertising policy.

A panel of industry experts judged the entries. 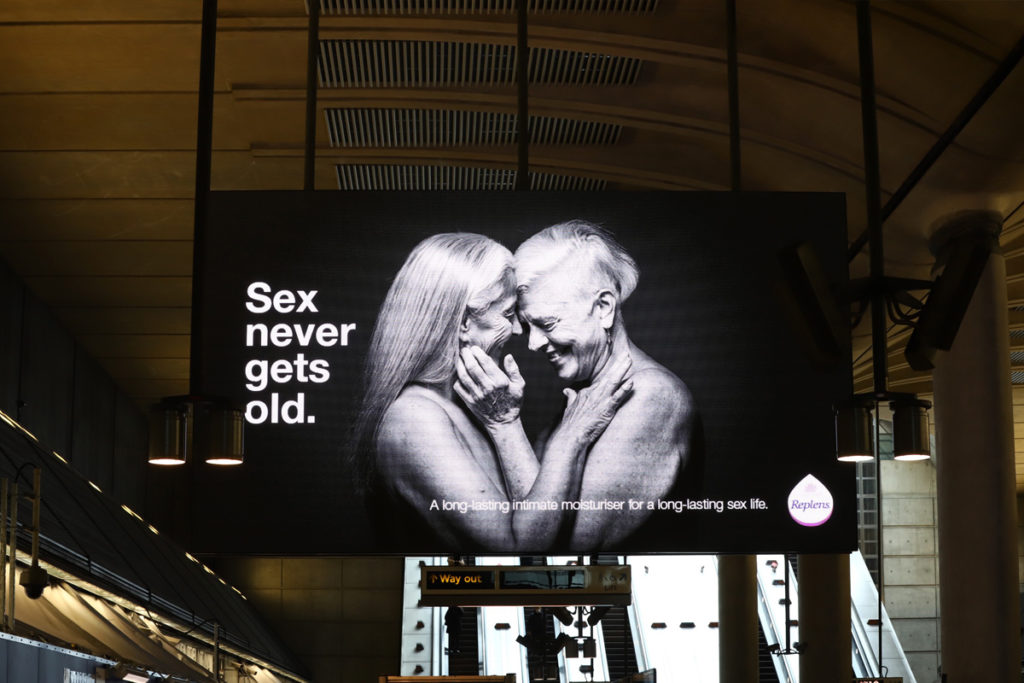 Replens MD’s campaign won and was chosen because of its bold creative, which challenges the assumptions around older people and intimacy by instead celebrating these relationships. 🥰 Now more than ever, it has become clear that a sense of connection and intimacy with other people is incredibly important and plays a vital role in protecting the health and wellbeing of everyone, regardless of their age. The brand was also commended for reducing the stigma around a product that some women may feel shy discussing or otherwise embarrassed to say they need. 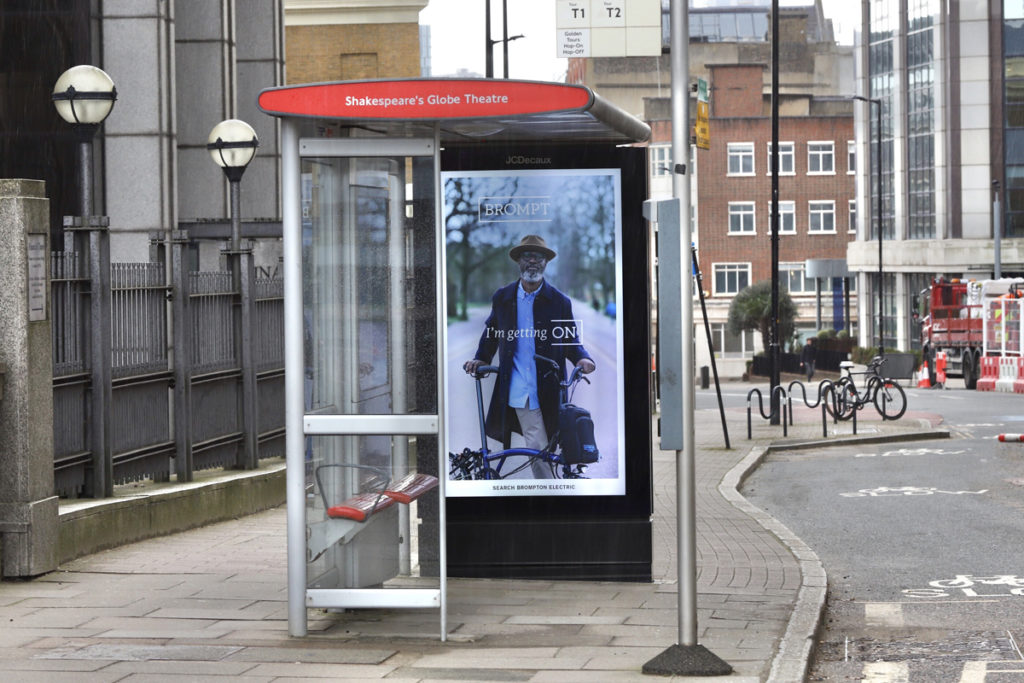 Runners up Brompton Bicycles campaign stood out as a result of flipping the term ‘getting on’ on its head. Rather than being used as a label to deride somebody for being older and stuck in their ways, the campaign cleverly shows a range of older people emanating confidence and literally about to ‘get on’ a bike, which is opening them up to a world of possibility. 🚲

Chris is responsible for a diverse portfolio of activity, ranging from promoting Buses and the Tube to improving the customer experience of all TfL services.

In 2012 he oversaw the Marketing of transport in London during the Olympic and Paralympic Games.  He has also worked to make TfL a more customer focused organisation, developing the ‘Every Journey Matters’ promise.

During his time at TfL, it has won every major Marketing award including Campaign’s Advertiser of the Year and Marketing Society and IPA Effectiveness awards.

Chris began his career in advertising and has worked at Saatchi & Saatchi (twice). Latterly he was chairman of Collett Dickenson Pearce.

He has a degree from Newcastle Business School, a Master’s degree from the LSE and is a regular on the Bakerloo line.

Leah is Mayoral Director for External and International Affairs, having previously been a Senior Adviser to Sadiq Khan’s campaign to be Mayor of London.

Before this, Leah was Director of Public Affairs for UNICEF UK. She has led advocacy campaigns for international NGOs such as Save the Children and ONE, as well as working for the UK’s leading international development think tank, the Overseas Development Institute.

Leah has also been a strategic communications adviser to the Shadow Cabinet on criminal justice, human rights, and constitutional reform.

She has an MSc in International Relations from the London School of Economics and a BSc in Philosophy and Politics from the University of Bristol.

Debbie joined the mayoral team from the Joseph Rowntree Foundation where she led the organisation’s work on poverty and ethnicity with additional areas of expertise on labour markets, education, lone parents, young people and society. Before this Debbie worked at the Runnymede Trust as Head of Research.

Alongside professional work, Debbie has a longstanding professional and personal interest in social justice, social mobility and community engagement. Debbie is on the editorial board of the British Journal of Sociology of Education and has sat on a number of other influential panels and working parties including the Poverty Commissions for both the National Union of Students and the London borough of Lewisham. She has also served locally as a chair of governors for two federated primary schools in East London.

She works with advertising and marketing agencies, brands and industry leaders to demonstrate how diversity can improve creativity and effectiveness. She uses a collaborative and strategic marketing approach with the objective of long term behaviour change.

Leila provides professional support to agencies in developing and implementing equality and diversity and inclusion plans,

She launched a new inspiration series Stepping into the Spotlight to support and complement the IPA Women of Tomorrow programme. It is aimed at mid to senior level women in the industry and addresses some of the challenges they face when putting themselves forward for senior positions,

She is an active member of UN Women and Unilever’s Unstereotype Alliance and has launched various best practice initiatives including the IPA diversity round table series and the IPA Diversity hub.

Louise Robinson is Editor of Saga Magazine, the monthly consumer publication aimed at Britain’s over 50’s market. With a readership of 500,000, Saga Magazine is the UK’s bestselling subscription publication and has a website which attracts millions of visitors.

Louise has been a journalist for more than thirty years – many of which we spent on national newspapers and magazines. A former editor of S Magazine, the Sunday Express colour supplement, for 15 years, Louise is also a judge on The Society of Editor’s Press Awards.

Trevor Robinson OBE is one of the most high profile and highly regarded people in advertising, despite being told at the age of 11 by his school careers advisor he’d have more chance of being a bus driver. A background that has enabled him to keep his feet firmly on the ground and to create populist ideas, loved by real people.

He has been responsible for some of the most famous and talked about advertising of his era from the iconic and multi-award winning ‘You’ve Been Tango-ed’ Orange Slap to the more recent Haribo ‘Kids Voices’ campaign.

In 1995 he set up Quiet Storm, the first agency to write, direct and produce its own work. To this day we are still one of the few agencies where creatives direct their own work. Trevor has also been recognised in influencer lists including Debretts 500, Campaign’s A List and The Drum Top 100 Adverati. He is a regular main stage speaker at Cannes Lions on creativity and craft.  And last year he was president of the craft jury, and the festivals ambassador for the craft category.

Trevor is renowned for his contribution to society and for encouraging future talent from marginalised backgrounds. He’s chaired the IPA’s Ethnic Diversity Forum is now part of the IPA’s Ilist and set up “Create Not Hate” to tackle gun crime by getting disenfranchised youths from his old community into creative projects. He was awarded an OBE in 2009 for his services to charity and advertising.

Richard started his career working in advertising at Publicis and Chiat/Day in London before moving to Kirshenbaum & Bond, New York to run the Snapple account. In 2000 Richard founded DLKW as Director of Strategy, which grew to become the UK’s largest independent agency, before merging with Lowe in 2010. During this time he won three IPA Effectiveness Gold Awards.

In 2017 Richard moved into media as Managing Director of Lloyds Banking Group’s media agency GreenhouseGroupM. And then in 2018 he moved across to Lloyds Banking Group, as Director, Marketing Communications, working across Lloyds Bank, Halifax, Bank of Scotland and Scottish Widows.

Steph has been CEO of Age UK since January 2018.  She joined one of our predecessor organisations, Age Concern England, in 2002.

Before that Steph had worked in the voluntary sector locally, nationally and internationally mainly on issues to do with older people and other groups of adults with care needs. She first became involved with Age Concern in the late 1980s as a volunteer for Age Concern Greenwich.

Steph was closely involved in the creation of Age UK in 2009.  Since then, Steph has had a number of different roles at Age UK, focusing on our international work, strategy, partnership with the Age UK network, people and performance, and governance, becoming Deputy CEO in 2016. Steph is also the Chairman of Cecily’s Fund, a UK charity supporting orphans and vulnerable children in Zambia.